What is Alzheimer's disease ?

Alzheimer's disease is a fatal, progressive and degenerative disease that destroys brain cells. It is the most common form of dementia, accounting for 64 per cent of all dementias in Canada. Alzheimer's disease is not a normal part of aging. Symptoms include having difficulty remembering things, making decisions and performing everyday activities. These changes can affect the way a person feels and acts. There is currently no way to stop the disease, but research is improving the way we provide care and will continue to search for a cure.

We do not yet know what causes Alzheimer's disease but researchers have identified risk factors associated with it.

The most important risk factor is aging. A minimum age needs to be reached for Alzheimer's disease to develop. People do not get the disease in their teenage years or even in their 20s. It is well-established that aging can impair the body's self-repair mechanisms. And of course, many of the risk factors increase with age, such as blood pressure, stress, and obesity.

There is no doubt that genetics play a role in the disease. Yet only a small percentage of cases is associated with the specific genes that cause the inherited form of the disease. Risk genes increase the likelihood of developing a disease, but do not guarantee it will happen.

Research is being done on other factors such as existing diseases or conditions that the person may have, infections, toxins in the environment, education level, alcohol and tobacco use, diet and exercise.

Are there treatments for symptoms of Alzheimer’s disease?

Is there genetic testing for Alzheimer's disease?

Genetic testing for the disease is not widely available in Canada. It is usually limited to people with a strong family history of the disease who are enrolled in specific research studies. Some testing is also done on referral from a family physician. You cannot request genetic testing on behalf of another family member.

How does Alzheimer's disease progress?

Alzheimer's disease typically follows certain stages that cause changes in the person's and family's lives. Because the disease affects each individual differently, the symptoms, the order in which they appear and the duration of each stage vary from person to person. In most cases, the disease progresses slowly, and the symptoms of each stage may overlap, often making the move from one stage to another quite subtle. The duration of the disease is usually seven to ten years but may be much longer in some people.

What are related illnesses?

As Alzheimer’s disease progresses and affects different areas of the brain, symptoms become more severe. The result is changes in abilities and/or behaviour. Once an ability is lost, it is not known to return, but research now suggests that some relearning may be possible.

Dr. Alois Alzheimer first identified the disease in 1906. He described the two hallmarks of the disease: "plaques," which are numerous tiny, dense deposits scattered throughout the brain that become toxic to brain cells at excessive levels, and "tangles," which interfere with vital processes, eventually choking off the living cells. When brain cells degenerate and die, the brain markedly shrinks in some regions.

The image below shows that a person with Alzheimer's disease has less brain tissue (right) than a person who does not have the disease (left). This shrinkage will continue over time, affecting how the brain functions. 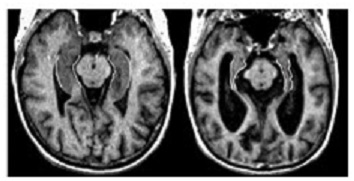 Learning about the disease